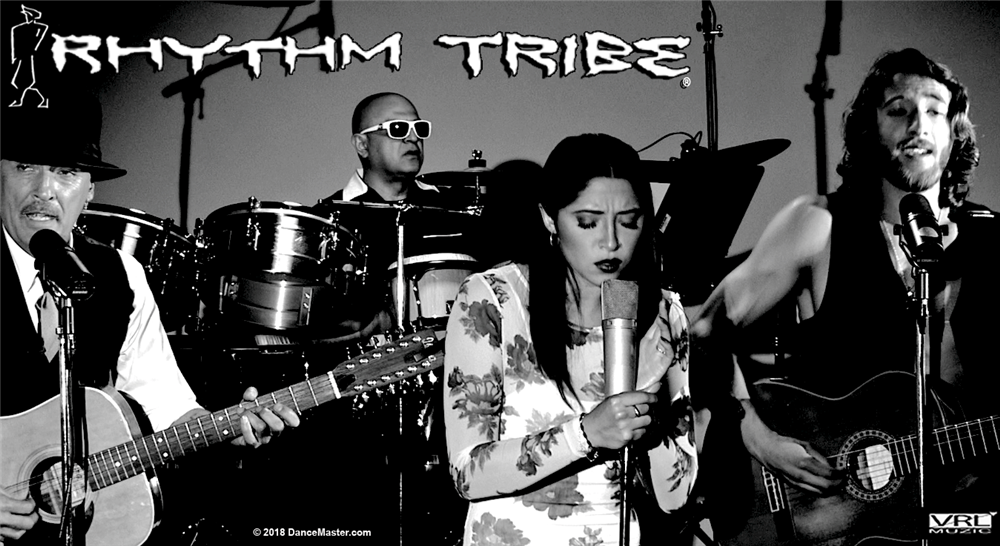 One of the age-old debates in music is whether it’s tougher to break through as a new artist or to break through again after having achieved success in the past. Rhythm Tribe, a hard-to-categorize project that has underground multiple incarnations, is in some ways trying to achieve both.

The Afro-Latin collective led by guitarist, vocalist and founder Thomas Guzman-Sanchez began in 1989 as a Los Angeles-area four-piece also featuring his wife, Marla; brother, Paul; and friend Steve Meade. The band experienced significant success, signing to Elektra and then BMG, and nestling onto MTV with a flashy video for the groovy tune “Gotta See Your Eyes.” But, while Rhythm Tribe also earned accolades from Rolling Stone, Thomas and company were tragically tagged with the backhanded compliment that they were “ahead of their time.”

“We were selling out concert halls and on the same label as Metallica and Mötley Crüe. We did the Tonight Show with Jay Leno,” Guzman-Sanchez recalled. “But promotions departments didn’t help, and we were stuck. There was no way to connect with the consumer except with live shows.” From 1995 until recently, Rhythm Tribe remained more or less dormant, with Thomas keeping the project under the radar and not pursuing radio airplay.

Now, Rhythm Tribe is reborn with new rhythms and a new tribe to boot. Consisting of three Guzman-Sanchez—Thomas, his son Mason (guitarist/vocalist) and his daughter Brisa (singer)—along with friend Esau Garcia (percussionist/drummer), the group falls into the category of acid Afro-Latin smooth jazz neo-funk indie.

Which is to say, Rhythm Tribe’s sound still isn’t easy to define. (Their song “You Are the One” cracked the top 20 on Billboard’s smooth jazz chart.) But fortunately, this time around, the music industry isn’t as cut-and-dry and exclusionist as it used to be. It’s much more fragmented—and much more Latin-friendly.

“I’ve never experienced as much racism as when I went to the conventions [in the early ‘90s],” Thomas remembered. “But here we are, and it’s a new time. And it seems like time has caught up with our acid Latin style.”

In many respects, Rhythm Tribe may as well be a new project altogether. Four years ago, Thomas stumbled across an unfinished recording that his mother and father, noted Puerto Rican guitarist Rafael Guzman-Sanchez, had recorded together in 1957. The younger guitarist completed the track, “Todo Eso,” with modern live instrumentation and vocals, and made it the centerpiece of Rhythm Tribe’s recently released comeback record, Generations.

“I used iZotope software, it’s this advancement in audio repair and correction—and removing pops and bringing EQ into certain frequency—so it sounds current because if you listen to the original, it’s all crackly,” he said.

Thomas’ father passed away in 1985 and never had the chance to meet Mason and Brisa, born in 1995 and 1998, respectively. But on “Todo Eso,” three generations of the Guzman-Sanchez family are united. “This is the reason I started the project,” Thomas said, before adding more frankly: “I didn’t think that the kids would be great... I thought I was out of it. So for months I was battling with myself, saying, ‘I think this is really good.’”

His feelings were confirmed when the band recorded, essentially ad hoc, a version of the Police’s “Message in the Bottle” that they had only rehearsed earlier in the day. “We [initially] recorded nine songs [but] had 30 minutes left in the studio,” he said. “We played [the cover song] in the kitchen in the morning. At the end, [Brisa] said, ‘I can do better.’ And I said, ‘No … that’s really good!’”

MESSAGES IN A BOTTLE (VIDEO)

Thomas has ambitious plans for Rhythm Tribe, to put it mildly. He intends for them to re-enter the studio to record three more songs, releasing “You Are Mine” as the next single, and said he is considering three offers with major labels to partner with the release. Moreover, Thomas has already compiled five music videos for Generations and a half-hour documentary on the project that he aims to air on Los Angeles TV station KTLA, bolstered by a 30-second spot he wants to be aired over the course of four weeks.

As the proverbial icing on the cake, Thomas wants Rhythm Tribe to finally make their debut live performance. Regardless of the outcome of those plans, though, Thomas intones that making music with his children is what has brought him the most joy through the serendipitous Generations affair. “Now that I’m a dad, I’m sitting across with my kids and can get what [my dad] was feeling,” he said. “It’s absolute love. We’re communicating without speaking.